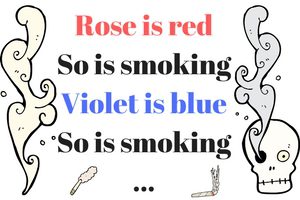 After 28 years I kicked ‘the habit’. Having survived non smoking for a whole week, I thought I would share the benefit of my idiocy with others.

At last I quit the coffin nails, those dreaded cancer sticks.

I yield to them no longer. I shall not require ‘a fix’.

My master is not cigarettes. From now on it is me.

Tis I who rule my life and I will live in it smoke free.

Why did I start? It does not matter. Reasons count but one.

But it was my decision. I admit that to my peers.

And so I smoked the dreaded weed for twenty eight long years!

Did I enjoy a cigarette? Yes there were quite a few.

Especially after food or if I had a drink or two.

But there were many, many more not nice or sweet sublime,

when Mr Nicotine required attention all the time.

In all the years I smoked I was supported by

We had one thing in common (Not withstanding coughs and choking).

The group was barred from many a place by these two words, ‘No Smoking’.

excluding those whose lives were ruled by smoke and filtered stub.

to buy some fags, then burn it, turning money into ash.

How could ‘non-smokes’ appreciate indifference to wealth?

Or understand our cavalier disdain towards our health?

I know. I was that smoker and embraced that dreadful role.

Until it hit me suddenly that I had no control.

My life was run by cigarettes, so firm was my conviction

that something had to change. I had to cast out my addiction.

With patches at the ready and my will power on top.

I picked a day to quit the stick and then I’d simply stop.

And that I did, one Sunday morning, filled with self belief,

which crumbled two hours later as the habit caused me grief.

Was it hard to stop? You betchya! Every single day.

Some minutes seemed like hours till the craving went away.

I conjured up so many good excuses to give in.

But I was so determined that tobacco would not win.

The war raged on inside my head. Withdrawal was no fun.

But I could stop it all with just one cigarette. Just one.

So tempting was the subtle, slimy, wheedling, nagging voice.

And yet I knew that ‘just one more’ would leave me with no choice.

I had to shut my ears and eyes and mind to that foul creature.

I had to practice what I preached. I had to be a bore.

I had to do whatever it would take to smoke no more.

The first day was the worst until the second day became.

The third day was the worst and then the fourth was much the same.

The fifth day? That was not so bad but bad enough to bear

But then I felt the sixth day I had got it beat. So there!

And now a week has passed and I am finally smoke free.

The fog has lifted from my life. T’was worth the agony.

But I’m no longer listening. To start again? A crime!

Already, in a single week, (and smokers you may scoff)

In health and wealth, in self esteem, I find I’m better off.

My life belongs to me again. I must have been so thick

to be a slave to nicotine – that smelly cancer stick!

They bore you with self righteous statements. Verbal red hot pokers.

I count myself amongst them so my smoker friends beware.

I’ll tell you I can smell your smoke in rooms and clothes and hair.

Telling you to stop is not what I would like to do.

The reason that I quit was choice. The same is up to you.

To quit is hard, I don’t deny it. Really it’s no joke.

But if you can withstand the strain, you’ll not return to smoke.

And finally a warning – and I say this in good heart.

If you think that it’s cool to smoke then just try stopping it.

You’ll find it’s easier not to start, than smoking is to quit.

Cigarette smoking is a deadly habit,

It already killed a lot…

It sets you free,

Free to be productive and healthy,

Free to have a happy family,

As you can’t enjoy being a retiree.

It’s dangerous to your health,

A leading cause of lung cancer death,

Save your life and your dreams of tomorrow.

How many times you’ve been told,

That your life does matter and can’t be sold,

How many times in a year,

People have died of lung cancer?

Who takes for granted smoking threat,

It is always your choice,

And my only piece of advice,

Take good care of your health,

Because it’s your greatest wealth.

never to come out

your lungs, if they could

would scream and shout

Your teeth; how yellow

but somehow, without one,

you tend to feel sad

It’s more than a habit;

these are all facts;

your body will rot;

as you’ll soon find out

So heed the warnings;

and listen to what I say,

because you won’t any other day